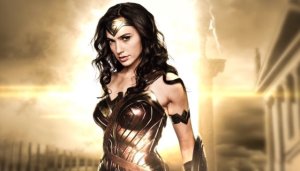 “Previews” is the monthly catalog for comic book stores and their fan-boy and fan-girl customers to peruse upcoming merchandise. The thing runs over 600 pages a month, and is a look into what’s going to be hot (or not) in comics and related merchandise.

In the latest issue, amid the ads for new comics, graphic novels, trading cards and Funko figures, there appeared the most curious solicitation:

“This impressive life-size foam figure from the Wonder Woman movie will stand guard in any room ….

“Based on Gal Gadot’s portrayal of the unconquerable warrior in the new movie, Wonder Woman stands slightly over 6′ 1″ tall.

“The figure is made of foam rubber and latex that’s carefully hand-painted for realistic detail and features synthetic hair. Ships in one box with stand included. Very simple assembly required …”

Why would somebody want this? The foam figure would probably need its own guard.

While actors routinely sign away their likenesses for action figures, I don’t think Gal Gadot could ever have anticipated something like this.

I’ve been reading “Previews” for a whole lot of years and I can’t recall ever seeing anything comparable for a male action star. A cardboard standee, OK, but not a 3-D foam figure.

It’s apparently new for the manufacturer as well. NECA seems to specialize in “Predator” items and a Freddy Krueger figure – about a quarter to size, thank you.

If I saw one of these in somebody’s home, I’d have all sorts of questions. And I would back away. You just don’t know what the poor foam has been through.

One thought on “Did Warner Bros. License a Wonder Woman Sex Doll?”