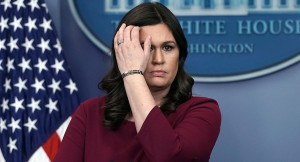 Judging from the stink, you’d think someone served flaming plates of poo at the White House Correspondents’ dinner this weekend.

Michelle Wolf what she was hired to do: She told jokes. She spared no one, Republicans, Democrats, CNN, Hillary Clinton, even Massachusetts Sen. Ted Kennedy, who has been dead almost a decade.

Press Secretary Sarah Huckabee Sanders was there, representing the White House since Donald Trump is too much of a chickenshit to attend.

And the kerfuffle that has erupted proves that not only can’t some people take a joke, some snowflakes can’t even understand a joke.

Wolf called out Sanders as the Uncle Tom of white women. She praised her role as Aunt Lydia in “The Handmaid’s Tale.”

But this was the remark that set off the firestorm:

“I actually really like Sarah. I think she’s very resourceful. She burns facts and then she uses that ash to create a perfect smoky eye. Like maybe she’s born with it, maybe it’s lies. It’s probably lies.”

Conservative guests allegedly stomped out of the dinner, outraged Trump’s agent was being mocked for her appearance.

The joke wasn’t about her looks.

It was about her integrity.

Of which she has proven, almost every working day, that she has none.

If a comedian wanted to insult Sarah Huckabee Sanders, she might call her:

You know, things that our president, the alleged leader of the Western world, has actually said about women.

For righty right-wing columnists, the remark was like a Christmas Day buffet. More proof of “media’s liberal bias,” they crowed.

They apparently were rendered deaf during the rest of Wolf’s equal-opportunity set.

Haberman practically broke her back sucking up to Huckabee Sanders, praising her for being so cool while under fire.

But here’s a simple solution so that something like this never happens again.

Reporters shouldn’t be partying with the people they cover, ever.

And with the press under fire like never before, with a president actually calling reporters Public Enemy No. 1, the annual correspondents’ dinner looks about as responsible as driving a car while blindfolded and drunk. It’s an event begging for trouble when there’s just so much real work to be done.

Trump has demeaned, insulted and attacked immigrants, Mexicans, Muslims, the handicapped, the LGBTQ community, women, the free press and anyone who has the temerity to disagree with him.

Every day he tears at the fabric of this great nation. But by all means, let’s bitch about a few jokes.

2 thoughts on “A Comedian Told Some Jokes. Get Over It.”

@Mark Perigard and Far From Rome 2015-2021. Unauthorized use without permission is prohibited.