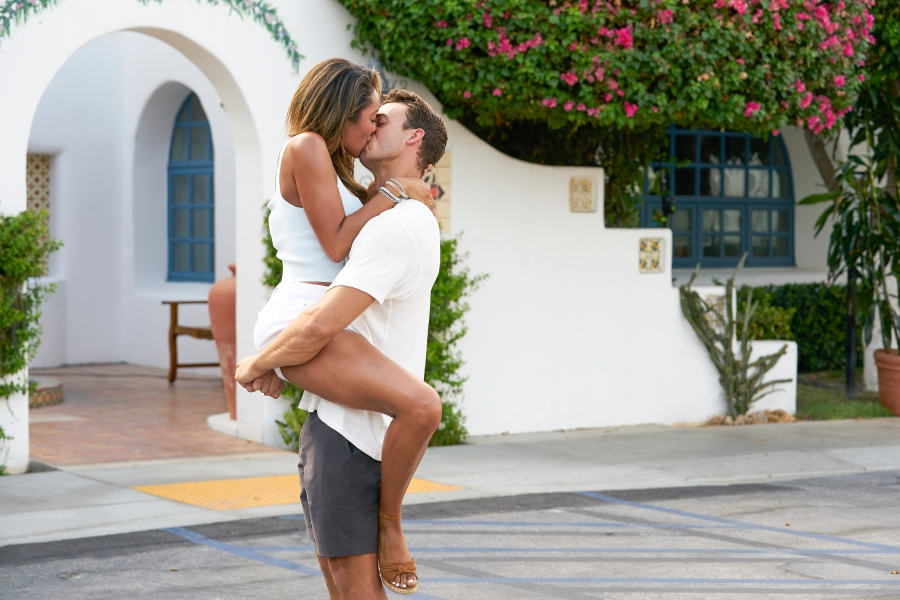 Three little words, and a couple could have been forever bonded.

Three little words, and a new family could have been born.

ABC’s “The Bachelorette” touched unexpected levels of tragedy last night when Ben realized he loves Tayshia – but was unable to say the words to her.

His moment of epiphany came during the hometown visit, when he was chatting with his best friend.

“You love her,” she said, with the kind of conviction only a true best friend, one who knows you, could muster.

“You love her. It’s not even a question,” she grins.

Ben needs a second to process the obvious.

To the camera, Ben admits he didn’t know it was love until his BFF called him out on it.

Suddenly he knows this is the most important night of his life, and he needed to share it with Tayshia.

But the ex-Army Ranger is tongue-tied when he is finally alone with her. He can’t get the words out. He acts as if he can’t get any words out.

Tayshia ends the night, and it’s not on the happy, romantic note all the other hometown dates have ended on.

“In true Ben fashion, I just blew it,” he says.

(Another ominous note – unlike the other families, Ben’s sister and pal didn’t get an on-camera confessional.)

On his way to the rose ceremony, Ben is looking particularly sharp and confidently tells host Chris Harrison, “I’m in love with her.”

Chris asks the obvious follow-up, because the producers tell him everything: Does she know that?

Tayshia hands out her roses to Ivan, Zac, – and Brendan.

And now it seems as if what is unspoken will never be said.

She asks to walk Ben out, and gets him to take a seat outside.

“I’ll be all right. I’m always all right,” he says, just as people who are not all right say out loud.

“Ben, don’t shut down on me,” Tayshia implores.

“I’m heartbroken, but I’ll be all right,” he says.

Tayshia doesn’t know what to make of his apparent lack of emotion.

She wants to know the last few weeks meant something to him, but she’s no mind reader, and Ben isn’t wired to react in this moment in the way she needs.

In the limo, Ben says, “I’m still in love with her. I really thought we were going to be together. I wanted to marry her. … Maybe she loved me and thought I didn’t love her back.”

You have to wonder what Tayshia, wherever she is right now, must be thinking as she watches this show and finally gets to hear Ben’s point of view.

Ivan’s dad has had cancer twice, a heart attack, and suffers from ongoing health issues, and I’m so mad he felt he had to risk his life to come on this stupid show in a pandemic. He loves his boy, but ABC should have taken the higher road and insisted on a Zoom call.

Zac’s mom is a huge Chris Harrison fan and so of course he had to come by and mess with the family.

Next week: The fantasy suites! And Tayshia’s men start to worry about who will get to enjoy them. It’s another two-night finale, as ABC wants to kill us all.