The Silver Age Superman fought everything from Brainiac to bug-eyed aliens, but his greatest and most persistent threat came from those closest to him.

Girl reporter Lois Lane and first love Lana Lang both wanted to expose his secret identity or trap him in marriage. Many times they figured the first would naturally lead to the second.

The Man of Steel was pretty good at putting them off, doing his super-thing while one of his robots or Batman covered for him by pretending to be helpless schlub Clark Kent.

But there came a moment when the two alleged loves of his life teamed to learn his greatest secret and forced him to turn to an unlikely source for help.

In “The Superman Super-Spectacular,” written by Edmond Hamilton and illustrated by Curt Swan and appearing in “Action Comics” No. 309, the Last Son of Krypton is tricked into appearing on the premiere episode of “Our American Heroes” – imagine “This is Your Life,” only with a flying horse.

That’s right, everyone from Superman’s life – from the staff of the Daily Planet to BFF Batman to the Legion of Super-Pets – has gathered to honor Superman.

And that’s a problem, because Clark Kent is expected, and how is Superman going to pull that off?

Lori Lemaris warns Superman: “Superman, I don’t know why, but Lois and Lana have been as thick as thieves, and trying to shield their thoughts from me …”

Gee, Lori, maybe because they don’t want their thoughts read by a nosy telepathic mermaid?

Privacy is a fascinating concept to consider when reading Silver Age comics: Nobody has any.

Superman uses his super-hearing to eavesdrop on the women. Lois “borrowed” a device from Professor Potter that acts like a Geiger counter around electronic devices. If a robot replaces Superman, they’ll know it.

Now Supes is in a pickle. He can’t turn to his old stand-by Batman, who’s actually there at the party – or even that shape-changing tease Chameleon Boy, who shows up only so Superman can remind us what he can do and then leaves when there’s an emergency back in the 30th century. (Question: If you are time-traveling, does it matter when you leave? So long as you have a fixed destination, you’ll still get there “in time” regardless.)

Batman decides to provoke Lois and her long-running interest in both their secret identities by unmasking – and revealing a Bizarro-Batman.

“Ha ha! It’s just makeup, Lois,” Batman taunts. “I wanted to tease you a bit by showing you what a Bizarro-Batman would look like!”

The facial expressions in this panel are priceless.

Batman looks downright unhinged. Lois looks as if she’s ready to give up on men forever and run off with Lana.

Then the impossible happens: Clark joins the party.

Lois and Lana are crushed when their device does not detect a robot. That must mean their theory that Clark and Superman are one and the same must be wrong.

These bright women apparently can’t fathom the idea that Supes might be acquainted with someone outside their circle who could slap on a mask and some glasses and pass for his nebbishy alter ego.

And what a reveal that is: President John F. Kennedy.

It’s always a surprise when a real-life figure pops up in a comic book, and so dramatically to boot.

“I’ll guard your secret identity as I guard the secrets of our nation,” Kennedy tells Superman.

“I realize that, sir!” Superman replies. “I knew I wasn’t risking my secret identity with you! After all, if I can’t trust the president of the United States, who can I trust?”

So why is this story so heart-wrenching?

Given how comics were dated about three months later than their actual release date to ensure a longer shelf life on newsstands, that means that this issue reached millions of readers just days after Kennedy’s assassination in Dallas on Nov. 22, 1963.

Youngsters looking for escape must have been devastated by the reveal.

Here was a reminder of how much the country had lost, a good, decent man with integrity.

A story like this could never be told today.

The current president would label Superman an illegal immigrant. If Superman was stupid enough to entrust his secret identity to him, he would immediately blab it to any Russian diplomat in the vicinity – as he did with Israeli intelligence – just to impress impress Russian despot Vladimir Putin.

The tale stands today as a sample of the best of the Silver Age, a capsule of charm and innocence, a reminder of a time when we trusted our elected officials, when we had elected officials worthy of our trust. 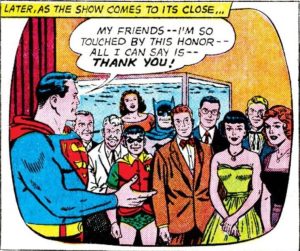 2 thoughts on “Is This the Saddest Superman Story Ever Told?”

@Mark Perigard and Far From Rome 2015-2020. Unauthorized use without permission is prohibited.