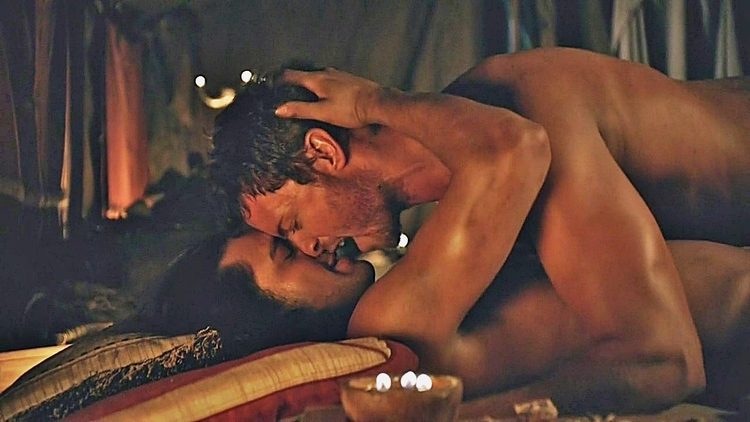 Pride is canceled across the nation because of COVID-19, so that gives you plenty of time to fire up the DVD player for a classic.

Across four seasons, Starz’s “Spartacus” captured a slave gladiator (first Andy Whitfield, then Liam McIntyre) becoming the leader of a rebellion that threatened the heart of Rome.

Amid this sprawling, violent, even gory epic that ran from 2010-2013 appeared one of the most passionate same-sex couples ever to hit the small or big screen.

Agron (Dan Feuerriegel) was a slave gladiator turned rebel general. Nasir (Pana Hema Taylor) was a slave freed by the rebels who joins them and wins Agron’s heart.

Their romance was treated like every other in the series – physical, fiery, hot enough to sear your eyes, if not your heart. Agron and Nasir hit the sheets and tore up the room.

Agron and Nasir – beloved by fans by their shipping name Nagron – were warriors, heroes who loved one another. That makes them about as rare as a rainbow unicorn in pop culture. They faced hordes of murderous Romans determined to kill them and a more personal threat – a man who tried to get between them.

In the “Spartacus: War of the Damned” series finale, the rebels mount their ultimate attack against the overwhelming might of the Roman legions. The body count is enormous, but – spoiler alert! – Agron and Nasir stand among the handful of survivors.

At a time when gay characters are still routinely killed off on series television (the aptly named “bury your gays” trope), Agron and Nasir made it to the final scene, walking off together to lead the other survivors to a new home.

Series creator, executive producer, and writer Steven DeKnight told TV Guide, “I thought it was important to have a loving couple make it out of this. … the Agron-Nasir romance was (one of) the longest-running in the series. It just felt right to have those two make it out … after some close calls.”

Later, addressing the symbolism of their survival, DeKnight said, “I think we helped to push same-sex relationships and give it a different spin, where in our world from the start, I always wanted race and sexual orientation not be an issue with anybody. It’s all based on who you are. None of that other stuff matters.”

When the Supreme Court made same-sex legal across the nation in 2015, Feuerriegel tweeted out to fans this sweet invitation:

Almost a decade after the series ended, no other TV couple has yet to match the power and fire of the duo known as Nagron.